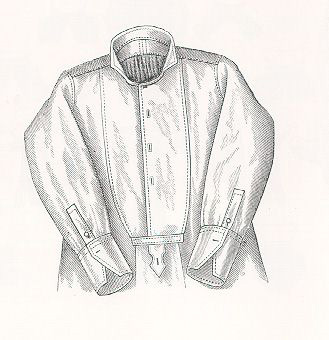 The shirt has played a supporting role in fashion for a long time. But it is such a characteristic supporting role that it should be honored with an Oscar for years of loyal, even centuries-long service to the body of the man. In fact, the shirt is one of the original forms of our clothing. Since man put a piece over his head to have it - as a poncho - to offer protection at the front and back and he then put the side seams together, there is a shirt.

A garment that is so close to us that in many languages there are proverbs and sayings that express our connection with this specific layer of textile. "To keep one's shirt on" is the American saying for patience. While "To lose one's shirt" means that everything is lost. In French, someone who is ruined saves the shirt: "Mettre quelqu'un en chemise" stands for someone plunder, Italians born with a shirt to his lucky birds, witness: "Esser nato con la camice."

In German and also in Dutch one reports "Das Hemd is näher als der Rock" (literally the shirt is worn closer to the skin than a coat, which means that blood relatives go before strangers). "Tonight not treasure, I have a headache!" Knew in the Middle Ages a very nice variant: the shirt was kept in bed. That was what knight Lancelot also made clear on his side-sleep that he intended to resist her.

For centuries the man who showed himself only in his shirt during the day was a wretch. A gentleman from his stand covered his shirt and in a sophisticated but unmistakable way he knew that he did not want to be counted among the working class. (An immaculate white collar and cuffs also point in that direction for years.) When it really comes to work and decisions are made, shirt sleeves in the business world are justifiable.
Then the jackets must go out. In many countries it is customary - especially with ladies in the company - to ask if the jacket is allowed. It is a remnant of the etiquette that men, until the 1950s, ordered not to show themselves in shirtsleeves. Unless the sleeves were attached to a sports cap. That was just the brace, but otherwise a man was supposed to cover his shirt. The entire history of the shirt is one of covering and revealing, whereby the shirt alternately occupied the function of practical undershirt or gaudy garment of which collar and cuff competed for attention with the other parts of the outfit.