Men's shirt
The modern shirt of a gentlemen has a long history, although the current form was developed at the end of the 19th century. In 1871, the firm Turnbull & Asser had the first shirt with button and buttonhole closed. Until then the shirt was pulled over the head. However, it had become a part of the outerwear for a long time. Until the 18th century, the shirt was worn under clothing and was only visible at the collar.

Shirt or undershirt?
Initially the shirt was part of the underwear and this origin continues to haunt it to the present day: it still does not seem particularly appropriate - especially in the company of ladies - uninvited to take off the jacket.

This may seem completely obsolete to many, but if we imagine that the shirt used to be an undershirt, it is understandable. In our collective consciousness this idea is still firmly anchored, at least in the western world. Until the end of the 19th century, the white shirt was a sign of prominence.
Only the man who had enough money to wash his shirts regularly and who had enough copies to be able to change frequently, could afford to wear white shirts. Because work, of whatever nature, would contaminate the purity of such a shirt, only a gentlemen could attract it, so a noble or well-to-do person who could live on his wealth. Striped shirts only became fashionable at the end of the 19th century. Still, they had a hard time getting accepted as part of the then usual suit for the city.

Men with striped shirts were always suspicious of camouflaging spots. As a compromise, the colorful shirt with a white collar and white cuffs appeared. Even today, combinations of printed material with a white collar are very popular, but they are never taken seriously as a white shirt.

Both standing and flat collars were available in a removable form. The advantage of this was that the collar could be washed daily, while the rest of the shirt was spared. Whoever had the opportunity to wash his shirts daily did not need something like that. The removable collar also offered the opportunity to vary the collars to suggest the possession of several shirts without actually having to make new purchases.

Yet there were also disadvantages, such as the time-consuming on and off and the search, in the morning, to the buttons. Some eccentrics held on to this fashion, such as the American author Tom Wolfe, whose style of dress is linked to the 1930s. The current shirt has not changed much since the First World War. Only the breast pocket appeared in the 1960s, with the disappearance of the vest. However, the traditional shirts still do not have a breast pocket, because nobody knows exactly what to put in and a possibly filled breast pocket also gives an inelegant appearance. 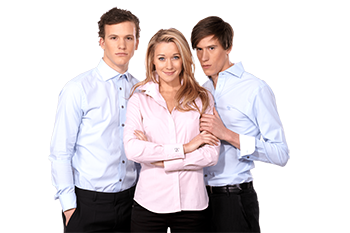 Turnbull & Asser is a British tailor founded in 1885. Prince Charles gave the company its royal authorization. Turnbull & Asser was founded in 1885 by Reginald Turnbull, a cloth merchant, and Ernest Asser, a salesman. Together they opened a clothing and yarn store under the name "John Arthur Turnbull" in London's St. James's district in the West End. This turned out to be a strategic choice, given the many gentlemen's clubs that were located in this neighborhood, which made Turnbull's business quickly boom. In 1895 the company name was changed to "Turnbull & Asser". In 1903, the business moved to a building on the corner of Jermyn Street and Bury Street, where the business has been located to date.

In 1915, during the First World War, Turnbull & Asser developed a trench coat for the British army that could also serve as a sleeping bag. This jacket was known as the "Oilsilk Combination Coverall & Ground Sheet". In the 1920s, when clothing became less formal, men's shirts became more and more visible as a garment.
Turnbull & Asser decided to focus on making shirts, of which they are still known today, and to drop the segment around the yarn.

Instead, the range was supplemented with sportswear and men's shirts (both tailored and ready to wear). The symbol used was a hunting horn with the letter 'Q' above it, a reference to the 'Quorn Hunt', one of England's oldest hunting parties.

During the 1960s the Swinging Sixties made their appearance in London. Turnbull & Asser was known as a 'court supplier' for this phenomenon, because they had included many modern and colorful designs in their range. In 1962 the company started to provide the film character James Bond, at the time played by Sean Connery, with shirts. These shirts were recognizable by their "turnback cuffs", cuffs closed with regular buttons, in contrast to classic cuffs. These cuffs are known as Portofino, cocktail or James Bond cuffs.

In the 70s and 80s the company decided to return to the base and focus more on the traditional aspects of the business. In 1974, the company noticed that it had more and more patronage of American origin, where it was decided to sell shirts there through department stores such as Bonwit Teller and Neiman Marcus. A branch was also opened in Toronto, Canada.

In 1981, after his marriage to Diana Spencer, of his mother, Queen Elizabeth II, Prince Charles was granted the right to distribute royal decrees himself. The prince, who bought his shirts from Turnbull & Asser since he was young, praised his first predicate to Turnbull & Asser as a supplier of shirts. The Prince of Wales also wears suits by Turnbull & Asser, made in the former Chester Barrie faction in Crewe, Cheshire.

Discover the shirts at http://turnbullandasser.eu/shirts-ties/shirts/seasonal-regular-fit-shirts

In 1986 Ali Al-Fayed, brother of former Harrods owner Mohamed Al-Fayed, bought the case. He renewed the store in Jermyn Street and closed the branch in Toronto. In 1993, the company Thomas Mason, supplier of cotton for Turnbull & Asser, was taken over by the Albini group, making most fabrics from Turnbull & Asser nowadays woven in Italy. Nonetheless, unlike many of Jermyn Street's competitors, Turnbull & Asser is proud to continue to produce his clothing in the UK, something that usually happens in their Gloucester factories. Al-Fayed also opened a business in 57th Street in New York in 1997 in Beverly Hills, due to continuing American interest.

Indeed, I am a shirtlover, are you?